There is a lot of talent and professionalism in the African music industry, and African popular music could contribute enormously to Western music” says Sara. Or Saraha as her stage name is.

What’s up with your name?
It’s a wordplay because Raha means joy and Sara is my name, so I used it for interviews in Tanzania, because I am from Kibaha in Tanzania, so it was like a rap thing. SaRaha from Kibaha.

What do you do as a musician? 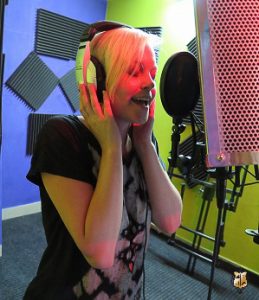 When I came back to Sweden my song “Mbele Kiza” came up on the P4 playlist and then on “Svensktoppen” (The Swedish chart). So P4 the radio channel contacted me and asked if I could be a jury member of the music competition “Swedish charts next!” It is difficult to survive as a musician in Tanzania. Copyright doesn’t really exist and no professional record company, so it’s easier to alternate between two countries, so that’s why I’m in Sweden now. But when I’m in Tanzania I work on new songs and this is also where my audience is. People recognize me on the streets and there are few who haven’t heard my music or watched my videos. In Sweden, few people know who I am, even though many have heard me on the radio.

Tell us about some highlights in your career.
My first big gig was when I got the opportunity to perform at the Miss Tanzania 2011 in front of millions of TV viewers, it was great! The following year I performed at the Kilimanjaro Music Awards (The Tanzanian equivalent to the Grammy Awards) with an even larger audience, and then I was also nominated for best video. It is probably among the most dazing and exciting experiences I have had…

Why a career in East Africa?
The career chose me, you could say! I spent a large part of my upbringing in Tanzania and Zimbabwe, because my parents were working with development. When I was in Tanzania in 2009 I realized there was an intense East African pop music industry and fell in love with the music. I moved there 2011 to focus on it full time.

Do you collaborate often with other musicians in East Africa?
In my genre, it is customary to do featurings (songs together), and there are several ways of doing it. Either we write something together, or we offer each other to sing parts of each others’ songs. In Tanzania, the producers have a greater role in creating the songs and an artist and a producer often cooperate. Producers often have their own unique sound, and as a musician I contact a specific producer depending on the style I want.

How is your music relevant in Sweden?
My music is created for local audiences in East Africa, but Africans all over the world can appreciate African music wherever they live. African pop music catches very little attention from the Western music industry. It is often categorized as “world music” which is both a strange and problematic concepts as it gives an image of something exotic and strange. There is a lot of talent and professionalism in the African music industry, and African popular music could contribute enormously to Western music if the opportunity to compete on more equal terms existed.

Why is it like this, you think?
There is this attitude which consolidates the differences; that African music is seen as something different. In the Western world it is very easy to come out as a musician on Spotify, whereas in many countries like Tanzania, there are no agreements with Spotify, so then as a musician you can’t become part of that system. You are excluded. It is about outdated copyright laws. The same with YouTube, it is possible to contribute with a movie clip but to get paid as a musician is almost impossible.

Swahili is like your second language along with English, how come?
I do not really remember because I was only two years old when I moved to Tanzania for the first time with my family. I have moved back and forth throughout my childhood between Sweden and East Africa and Swahili has become part of my life and a way of expressing myself.

Do you have a boyfriend?
Yes! I have been fortunate to meet someone who shares my experiences of belonging to different cultures and who lived in different parts of the world. I think it is important to spend your time with someone who can understand your desire to explore new things and push the boundaries in a creative profession.